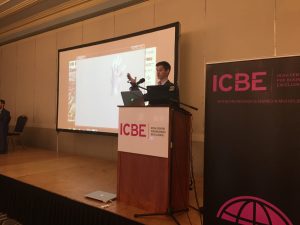 “10 years ago Brendan O’Flynn watched Tom Cruise in minority report manipulating a screen with a glove and asked  ‘wouldn’t it be cool’ if we could create that” said Ray O’Cinneide in kicking off his talk on the story of the Smart Glove.

Tyndall had technology and the research capability to make it and the basic idea evolved over a number of years. Early version fell off hands and broke and they knew they needed to make it into something that people want.  To do this they partnered with Bray based Design Partners who helped focus on three things

The process helped them think about customers and also the need to have robust software without which the hardware is useless.  Over series of iterations the Smart Glove has received awards and finally went on the NDRC discovery programme.

Through the programme they learnt to

The €150 billion industry for AR and VR was a natural market for them with a vertical focus on the segments that would most benefit including:

Ray finished his presentation by demonstrating the glove in action that allows the user to reach into that simulated virtual world.  During the group sessions potential uses in the manufacturing sector were expanded.