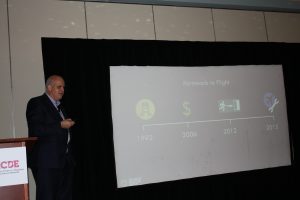 “4 years ago I was not a believer and thought all this stuff about core values was text book stuff but that has changed now” was a refreshing opening by Patrick Jordan and his journey to seeing the importance of Core Value to an organisation.

After existing some business and investing in start-ups Patrick entered the world of aviation. 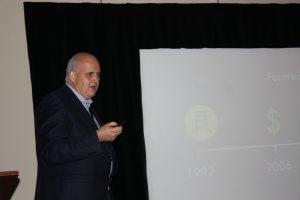 ity there was risk with a potential €250,000 a week loss if hangars were empty, highly unionised, large reliance on key customers and his own lack of understanding about aviation.  However as Patrick points out “You get to the point when you have to make a decision.  Rather than focus on the reasons not to invest I focused on the reasons why which were significant including worldwide demand, payment security and pipeline.”

The offer stage was complicated with changes to work practice, redundancies and removal of historic days off.  After a few months the deal was approved and the problems moved from the examiner to Patrick.

“Sometimes you just need a new team and people were tired and needed to see new people” said Patrick as he discussed the building of the new team from a new CEO followed by a COO, marketing and finally HR & training manager who became the central team to turn around the company.  None had aviation experience.

Speaking on his experience of turning around successful companies “If you have a problem you have it in one of three departments sales, operations or finance.”

With the team in place Patrick narrated the Turn Around Journey which started with the creation of a new identity.  Patrick confessed to be sceptical about the process of forming the values behind the new identity.  During the sessions the values evolved were:

In order to make them real they published the core values on the canteen wall and discussed with employees.  This was followed up with work on visualisation which was captured in “Where do you want to be in 10 years time and what will you do in the next 20 days to get there.”

In order in implement the change the management team also focus on creating a great place to work.  This ranges from office environment to created a right first impression with significant investment in painting the shop floor to collateral.