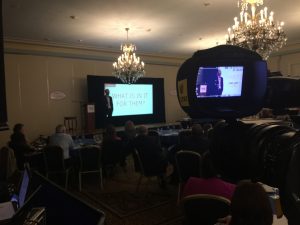 Commenting on the importance of influence Mr. Fitzpatrick said “Influence is one of the most vital and indispensable skills that all leaders must possess. Nowadays, with globalisation and social media dominating our world, how we communicate with each other has changed massively. Your ability to get others to agree has never been more important.”

In his  presentation he outlined the 3 different aspects of Influence.

1. The Attitude of Influence

There are 4 key factors that makes influence possible.  Mr Fitzpatrick outlined how how recent developments in neuroscience, behavioural economics and social psychology has given people a far better understanding of persuasion and influence.

Persuasion is about changing peoples beliefs.  In order to influence them you need to understand what beliefs they have formed about you in advance.  With this knowledge you can construct a way to influence them  State or emotion, how you feel or the emotion you express can make a big difference.  Focus, Physiology and Ethics are also key factors.

Owen pointed out the importance of Confirmation Bias where people convince themselves of a perspective and only look for cues that support this. Armed with this insight people can be more efficiency influenced.

2. The Psychology of Influence

The speaker proceeded to explain the 3 essential aspects of influence (source, audience and message).  People are impacted by who you are and frequently where the message came from is more important than the message.  Speaking on the audience Owen discussed the importance of identity and internal perceptions.  Finally on the message Owen asked  what do you want them to say.

There are 6 principals of influence

3. The Language of Influence

Finally Mr Fitzpatrick revealed some of the most important phrases that determine how people feel and how to get people to say YES. He also shared how to structure communication to get buy in.

Using demeaning words to describe people can have a very big impact on the perception that people have about someone and action they take.

Use of words and framing also impacts greatly on behaviour and Owen shared example of using  lose/save, surcharge/discount death/survival to very different results.

The point in a sentence when you use the word BUT is important because it draws attention to the comments/words after it.

Research has also show that using the word BECAUSE as people are hard wired to assume it has logic.

Owen asked the group to pick the most powerful statement when thinking about the gym.

Personal preference of phrase is important as it impacts how much they will do something.

Finally we are all driven by something from:

The key is finding what people are motivated by.